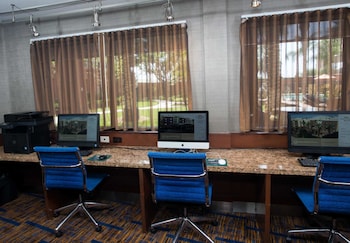 Property Location
When you stay at Courtyard by Marriott Los Angeles Burbank Airport in Burbank, you'll be near the airport and close to Walt Disney Studios and Warner Brothers Studio. This hotel is within the vicinity of Universal Studios HollywoodÂ® and Hollywood Sign.

Rooms
Make yourself at home in one of the 184 air-conditioned rooms featuring refrigerators and LED televisions. Wired and wireless Internet access is complimentary, while 48-inch flat-screen televisions with cable programming provide entertainment. Partially open bathrooms with shower/tub combinations feature complimentary toiletries and hair dryers. Conveniences include phones, as well as desks and coffee/tea makers.

Amenities
Be sure to enjoy recreational amenities including an outdoor pool and a fitness center. This hotel also features complimentary wireless Internet access, gift shops/newsstands, and a fireplace in the lobby.

Dining
Satisfy your appetite at the hotel's restaurant, which serves breakfast and dinner, or grab a snack at a coffee shop/cafÃ©. Quench your thirst with your favorite drink at a bar/lounge.

Business, Other Amenities
Featured amenities include a business center, complimentary newspapers in the lobby, and dry cleaning/laundry services. Free self parking is available onsite.